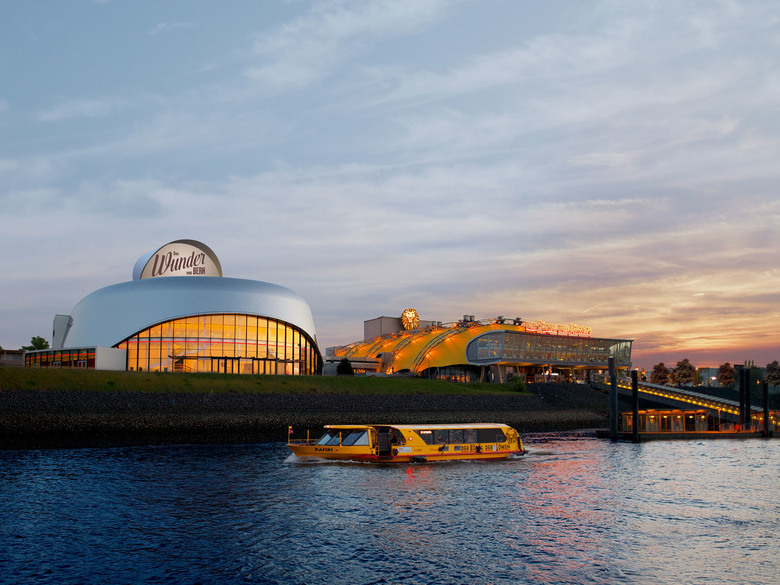 The musical ‘The Lion King‘ first premiered in Hamburg in December 2001 – and has been a success story ever since. Almost all of the over 5,000 performances were sold out, far over 10 million visitors watched the Disney musical in Hamburg alone. This striking success encouraged Stage Entertainment, the German operator of the Lion King, to start with the production of an own musical. On 23 November 2014, ‘The Miracle of Bern’, a musical of Sönke Wortmann´s film about the first German football world championship success, celebrated its world premiere. One aspect which underlines the importance of the musical to Stage Entertainment is that it received its own theatre, right next to the Lion King. Visitors of the musical are brought to the theatre by ferry, which gives them a spectacular view over the Hamburg waterfront, especially in the evening hours. However, not only the city shows its true splendour in the evening and at night, this is also the time when the new theatre looks the most spectacular, thanks to impressive lighting. Having arrived at the theatre, visitors get to stay in its extensive foyer with stunning appearance: An interplay of the colours red and white complements appealing lighting elements and creates a unique appearance. Come the start of the show, the doors to one of the most modern theatre halls in Germany are opened. Countless pieces of stage equipment ensure successful shows, the most impressive being an enormous LED wall on the stage. It is mainly used during the endgame portrayal, when actors seemingly float on the vertical surface. The theater on the Elbe waterfront has always put an emphasis on capable players: Lindner was contracted with most parts of the dry lining works in the picturesque foyer. In order to create the stunning appearance, multi-levelled lighting coves were installed over the full length of the entrance hall.
Location