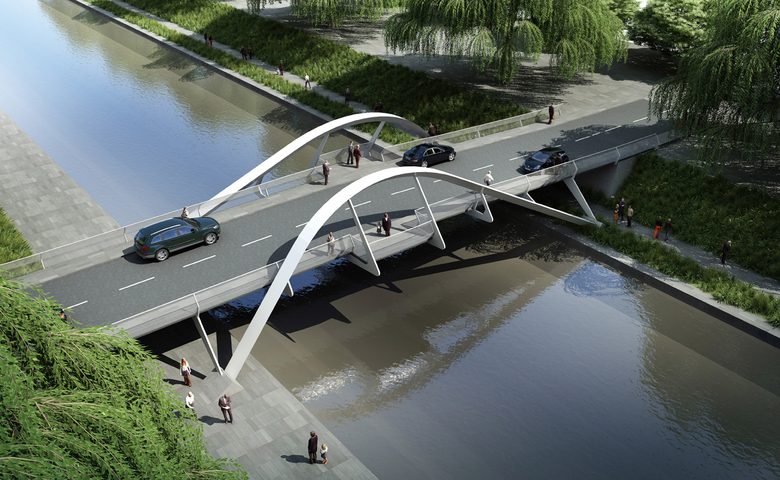 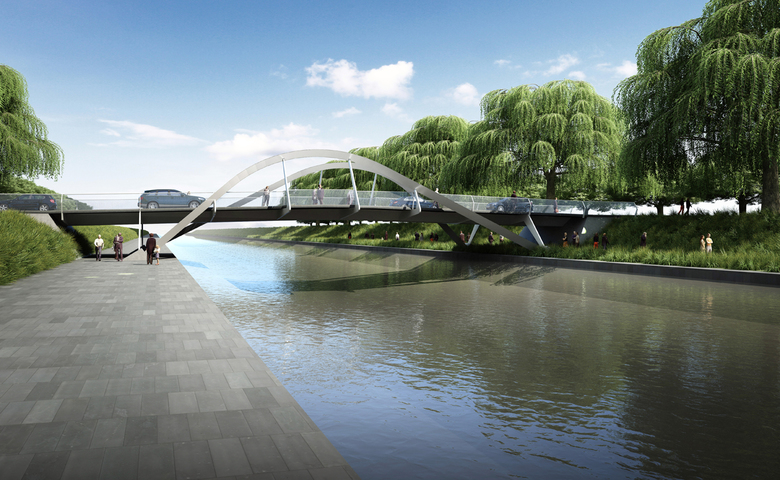 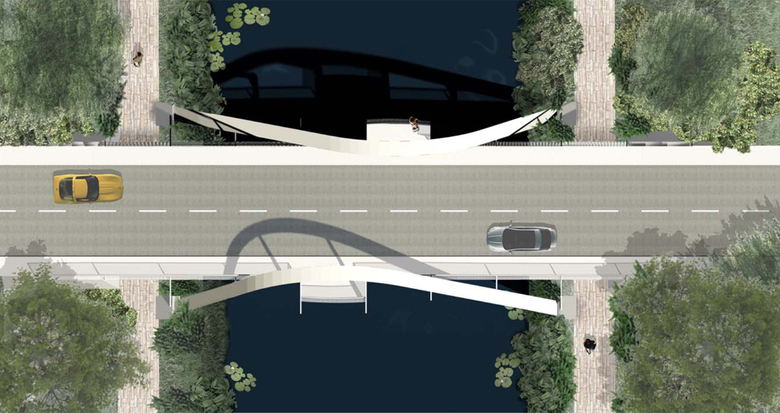 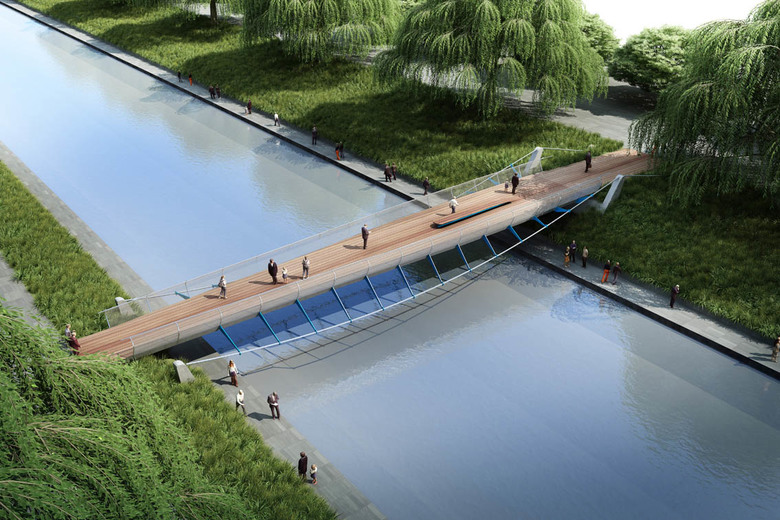 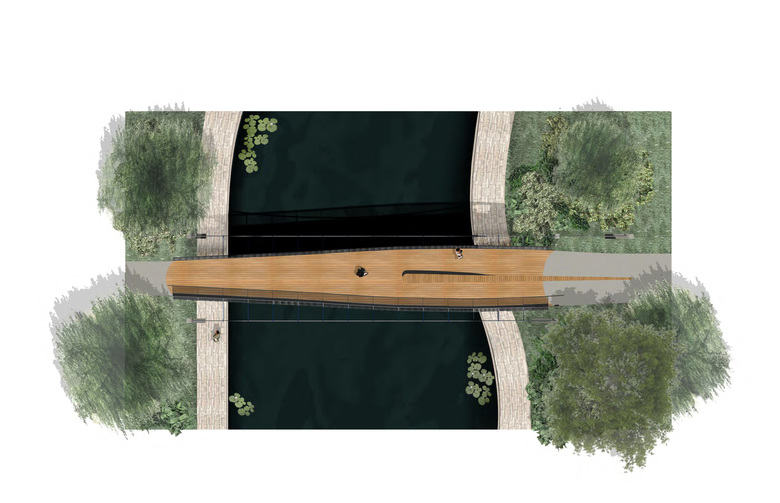 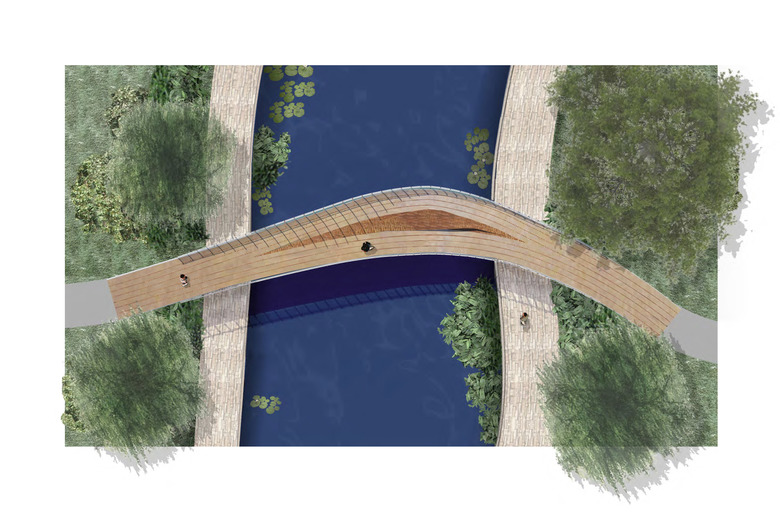 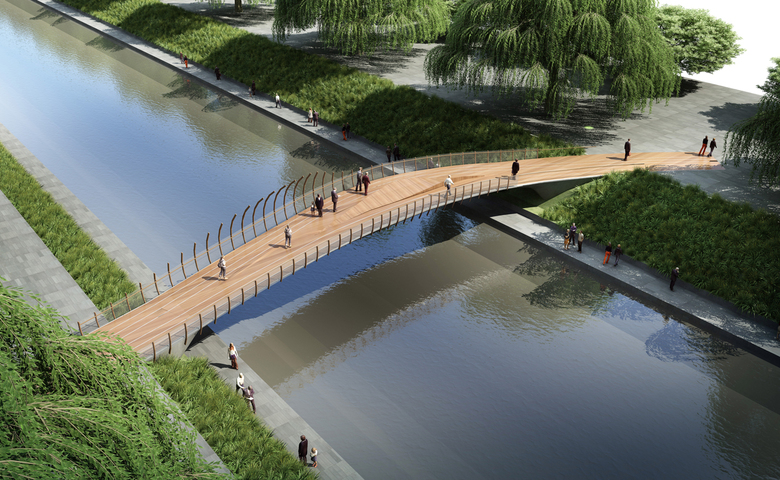 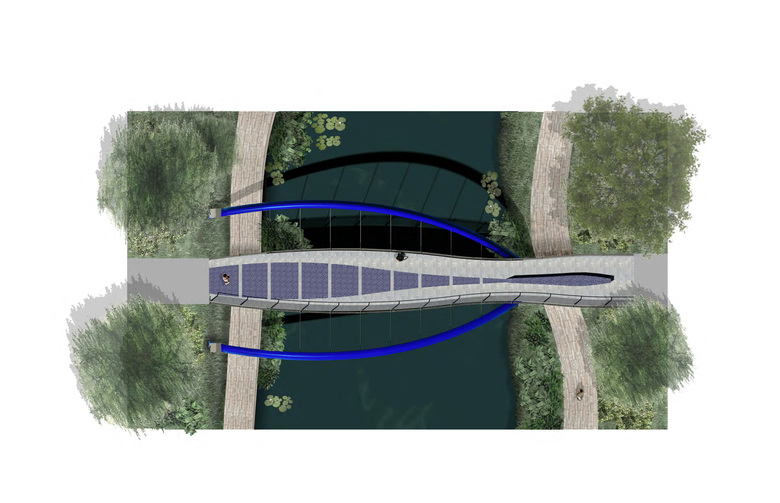 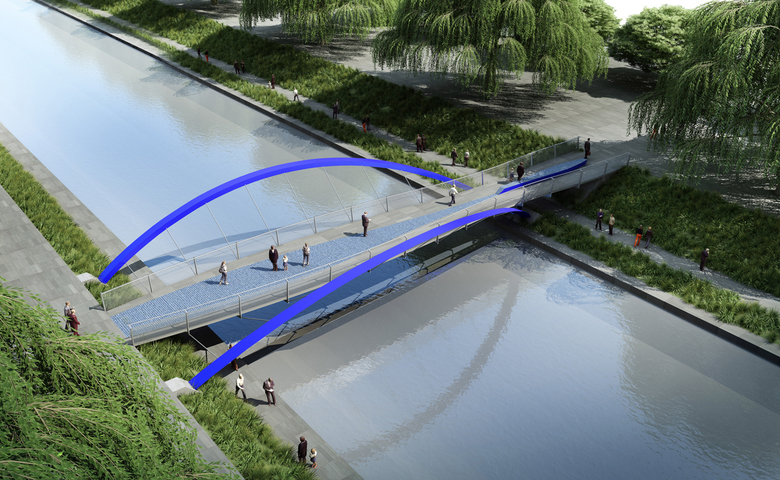 KI Studio won a Chinese bridge competition for a road bridge across a canal for the New Hangzhou CBD district. We also received two third prize nominations for four pedestrian bridges in the same area.

Inspired by the outline of the traditional arch bridges of West Lake, the shape of the arch is asymmetric and based on the catenarian principle with one leg extended to one side. The structure is based on a pair of arches that are ‘reversed’ instead of mirrored, to create a sculptural composition that gives the bridge a dynamic character. The arches are leaning towards the centre of the bridge and steel fins are pivoted from the arch supporting the deck. A viewing platform has been incorporated at midspan to add interest for pedestrians.

This option is inspired by the motion of a wave. The superstructure is conceived as a cable suspension which transitions from above to below deck, echoing the motion of water. The deck tapers towards each abutment creating the shape of a rowboat, whilst the struts linking the deck to the suspension cable echo the motion of oars.

The geometry of the bridge allows clear views to either side of the river and a feature seat has been incorporated for passers-by to enjoy the view of the waterway. The light appearance of the structure is effective in creating an elegant crossing with a strong identity.

The sculptural form is inspired by the traditional identity of Hangzhou with tea. The structure varies in width and has a curved alignment in plan to further express the form of a leaf. The superstructure consists of a traditional steel box girder that deepens as the bridge widens towards the mid-span. The railing consists of a series of flaring arches that together outline the rolling shape of a leaf whilst also reflecting the sinuous curve of a wave when seen in elevation. While walking along the bridge, the sinuosity is also expressed at mid-span by curving and widening the deck, and extruding the pavement to gradually become a seating element in the shape of a leaf. The parallel lines within the decking reflect the pattern of tea plantations. The result is a sculptural structure full of movement that contributes to the identity of the New CBD.

Inspired by the tidal bore, the bridge, in elevation reveals the shape of a wave. The wave theme is further accentuated portraying a ‘splash’ in plan view. The combination of the two elements creates a sculptural and dynamic structure based on two arches spreading apart. The geometry of the two arches acts as a brace for the superstructure whilst a playful motion of the suspension cables/ struts further emphasizes its sculptural quality. The arches are triangular in cross section making them appear thinner when the bridge is seen in elevation.

The abutment at the convergence point of the two arches maintains the wave form and has been set back to allow for a pedestrian undercrossing, further emphasizing the asymmetrical design of the bridge. A steel box girder in the form of a bench has been incorporated at deck level over the pedestrian undercrossing to retain maximum clearances. The structure also appears to be ‘floating’ effortlessly between abutments and arches. Whilst the box girder, may need to protrude below the deck, for the purpose of this concept design it has been shown at deck level. The cross members supporting the deck have been illustrated as steel “T” sections. However, these elements could be replace with steel “I “ sections.

The railings are expressed as an extension of the cross beams giving the structure a cleaner and more contemporary appearance. The bench would be clad in mosaic tiles with various blue hues to further express the ‘water’ thematic.