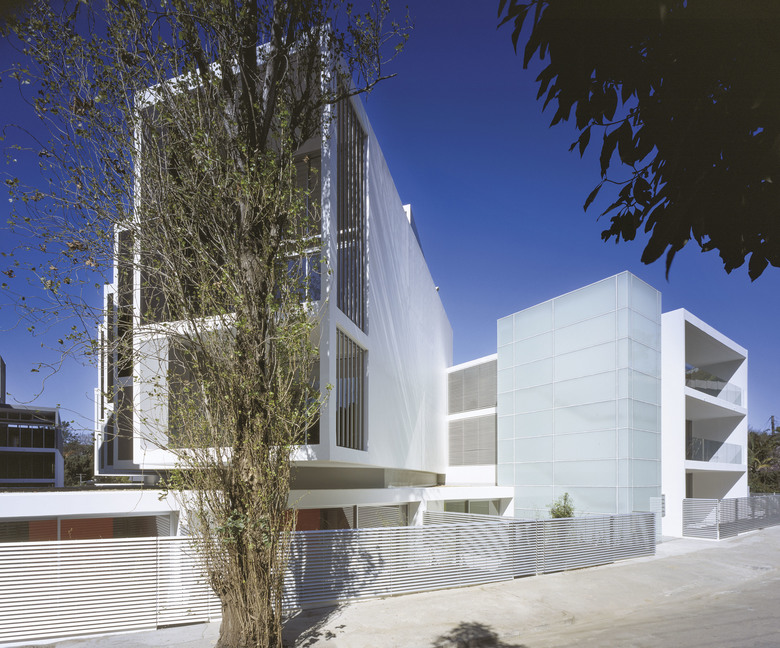 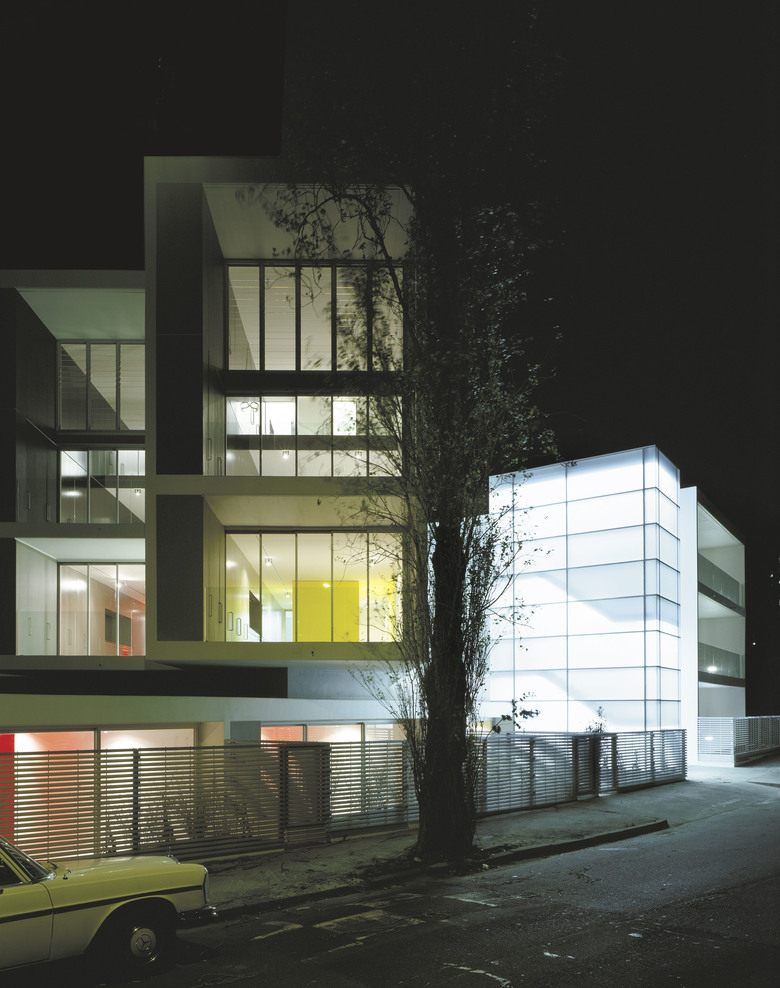 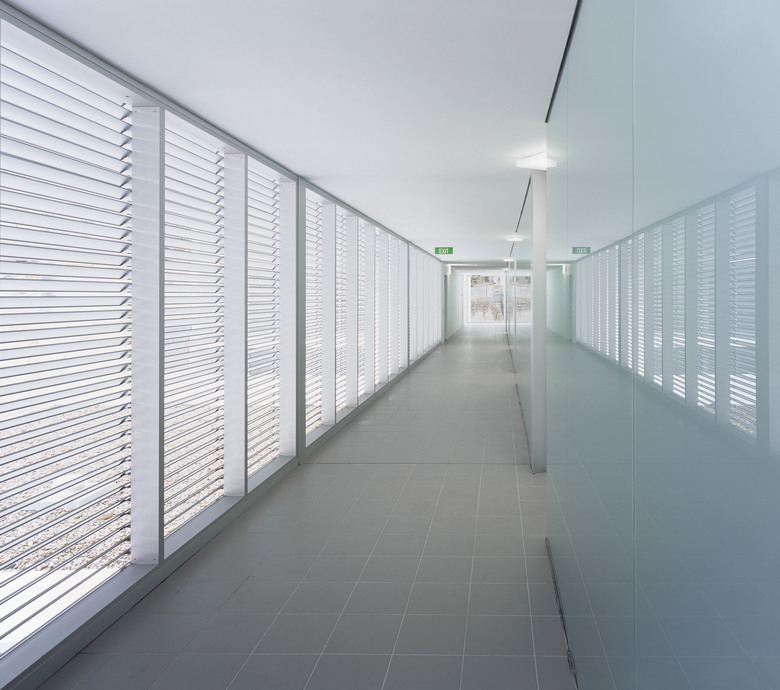 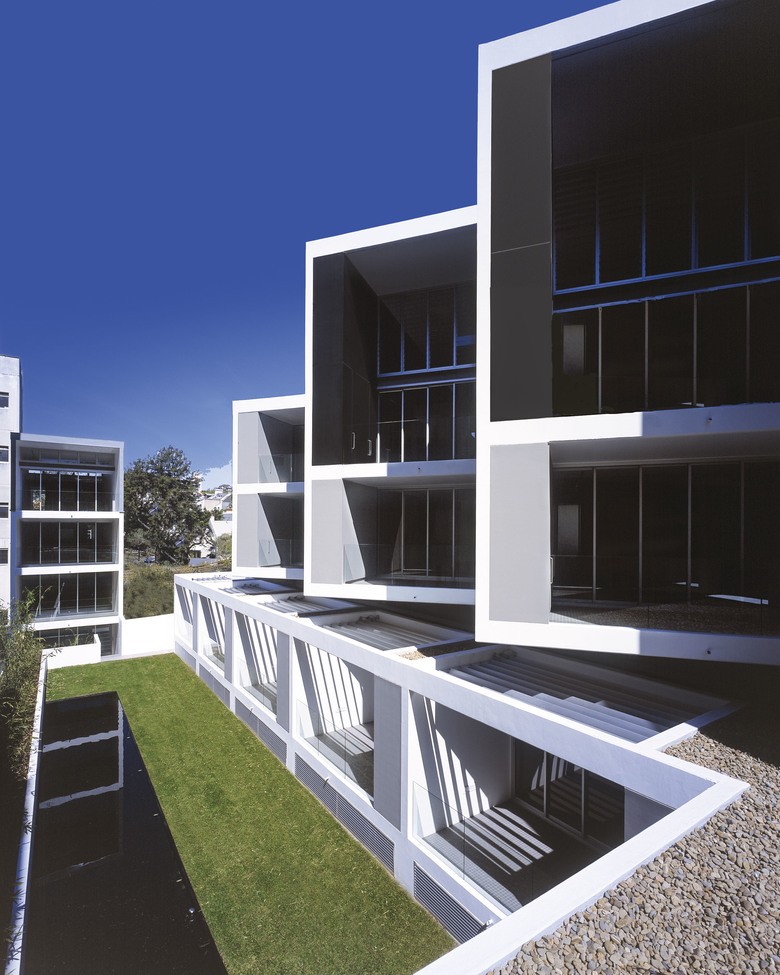 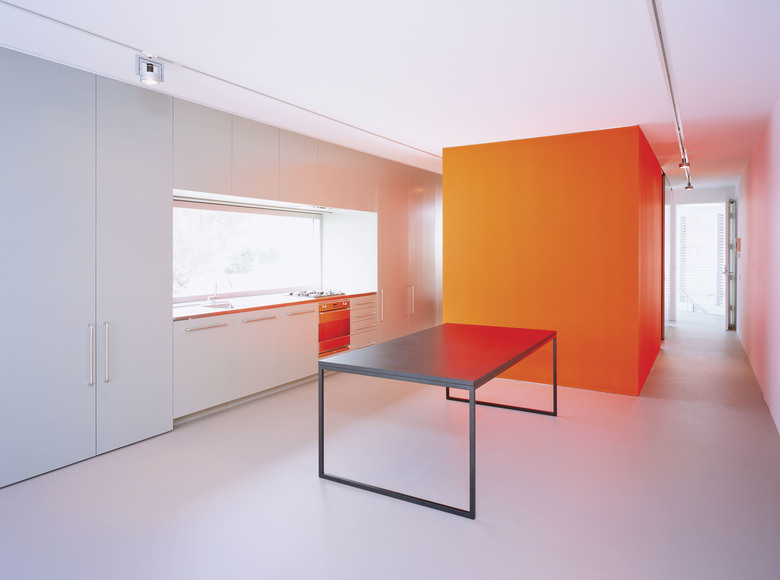 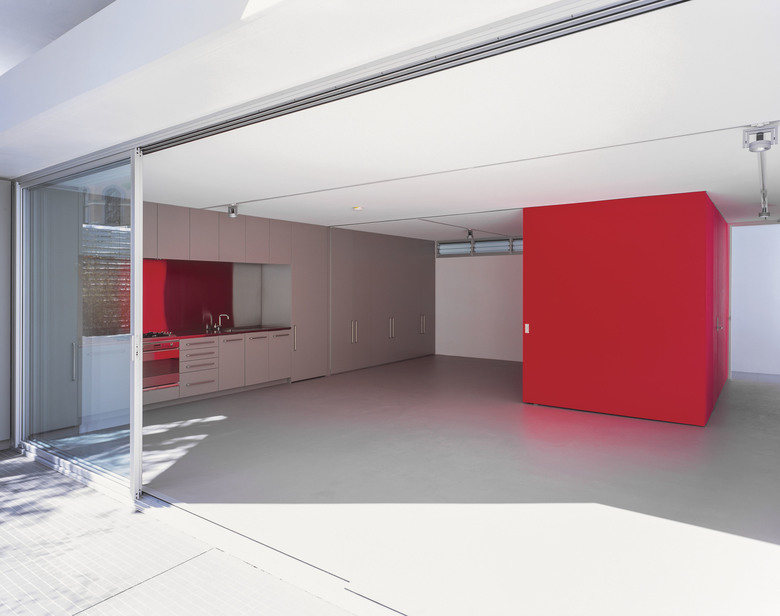 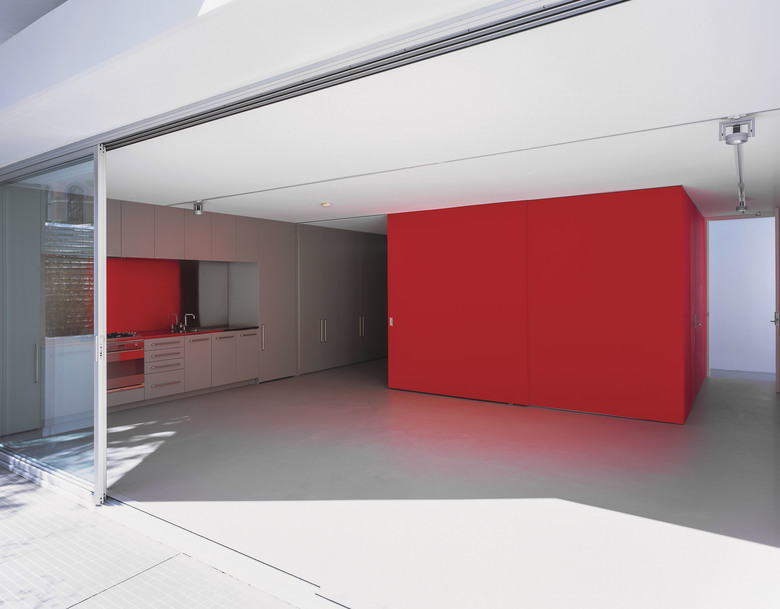 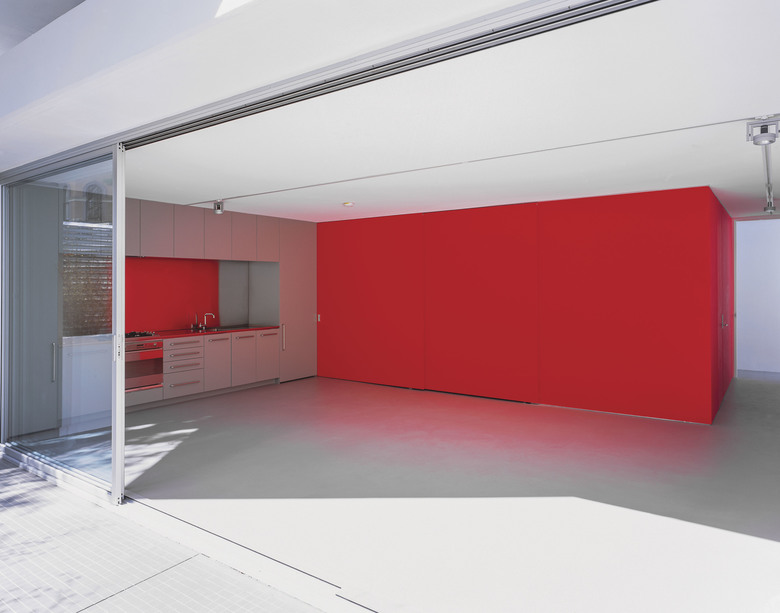 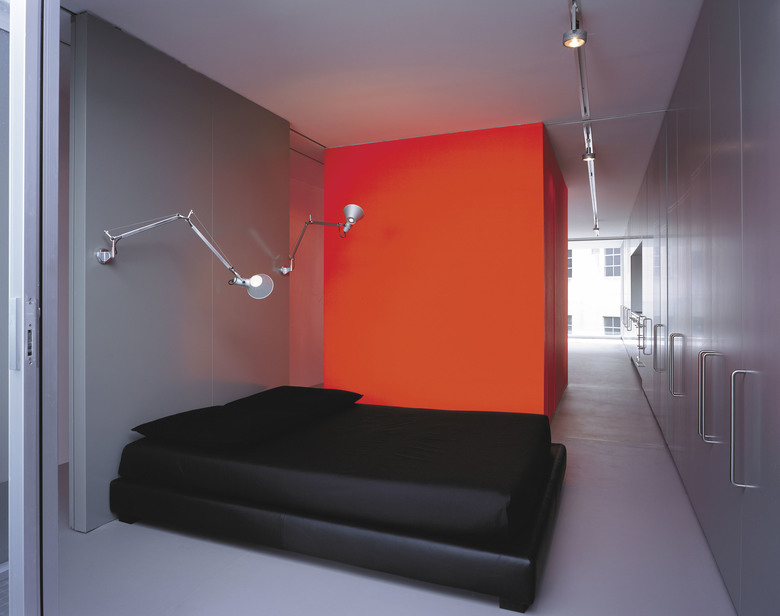 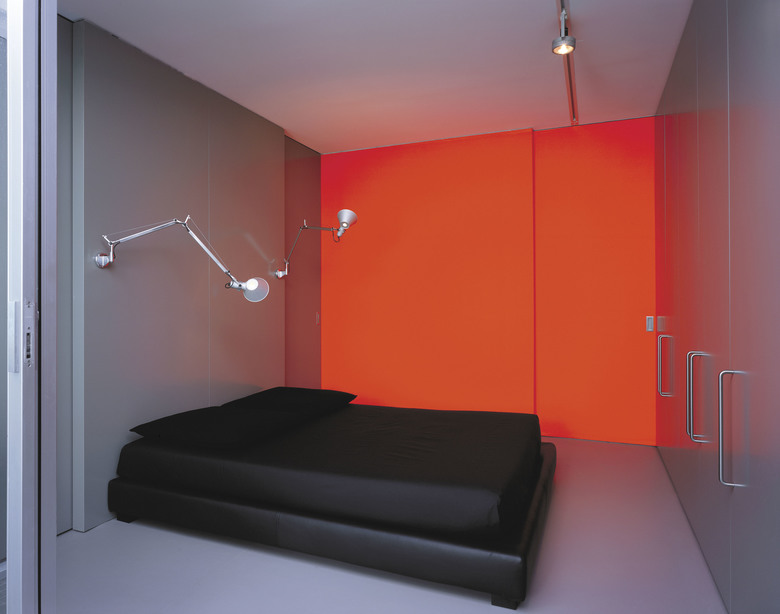 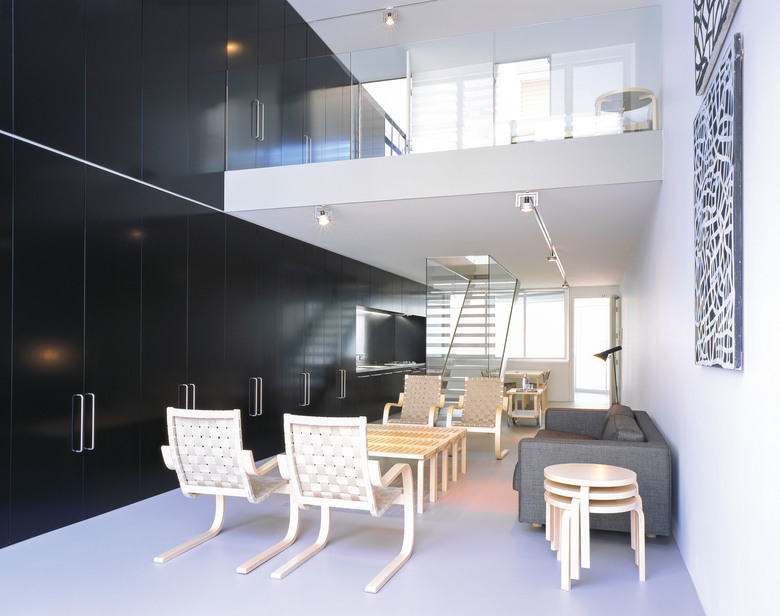 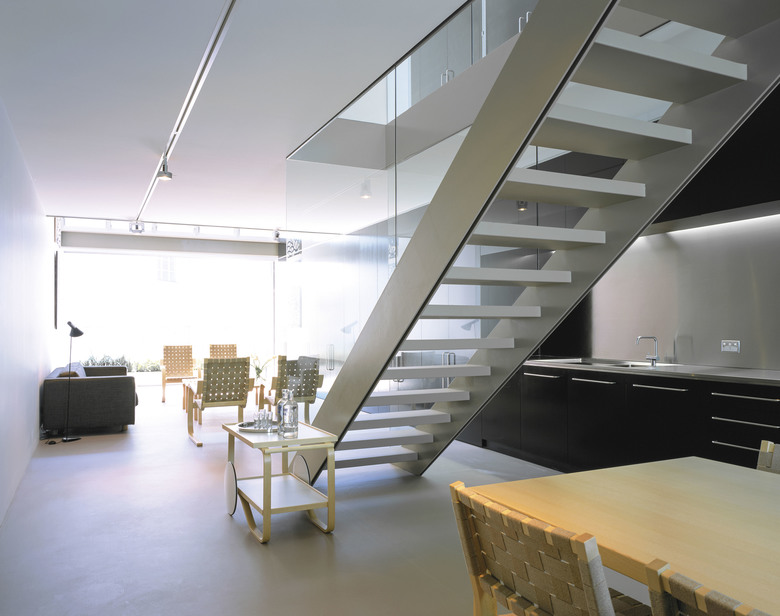 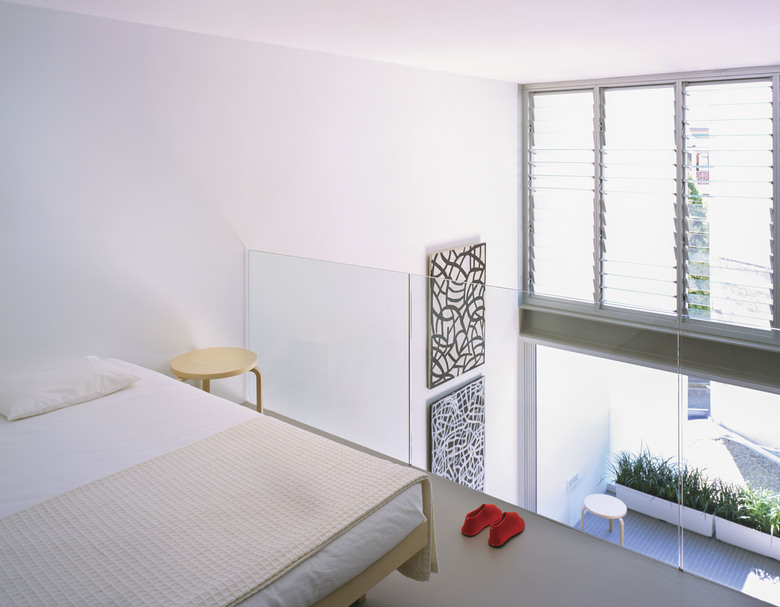 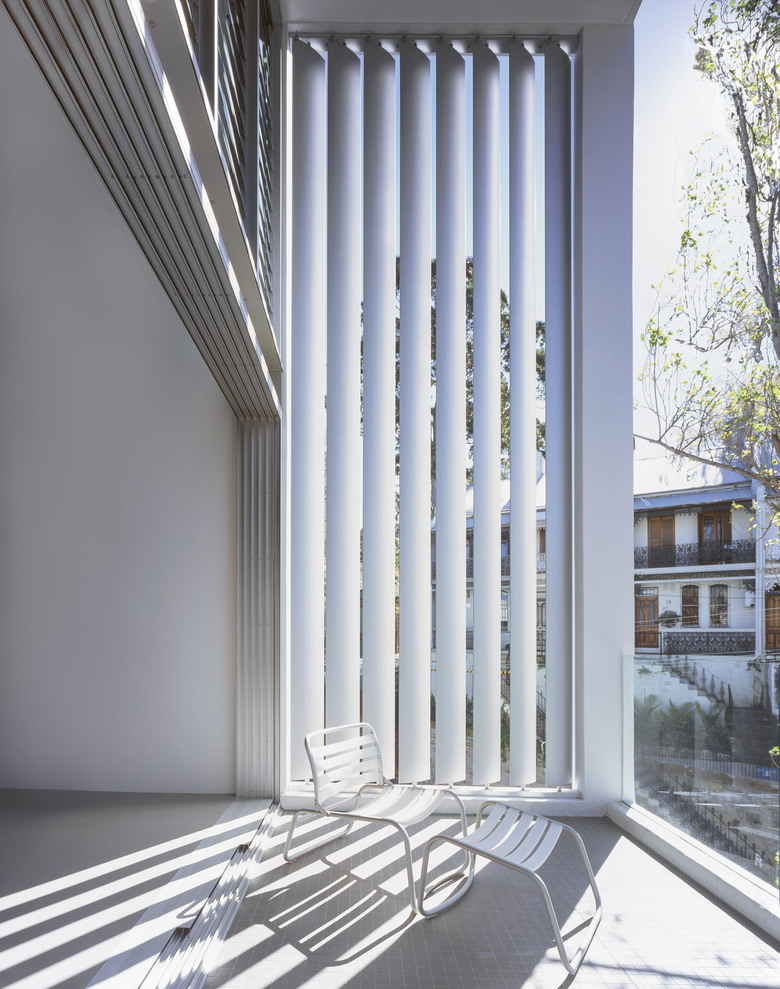 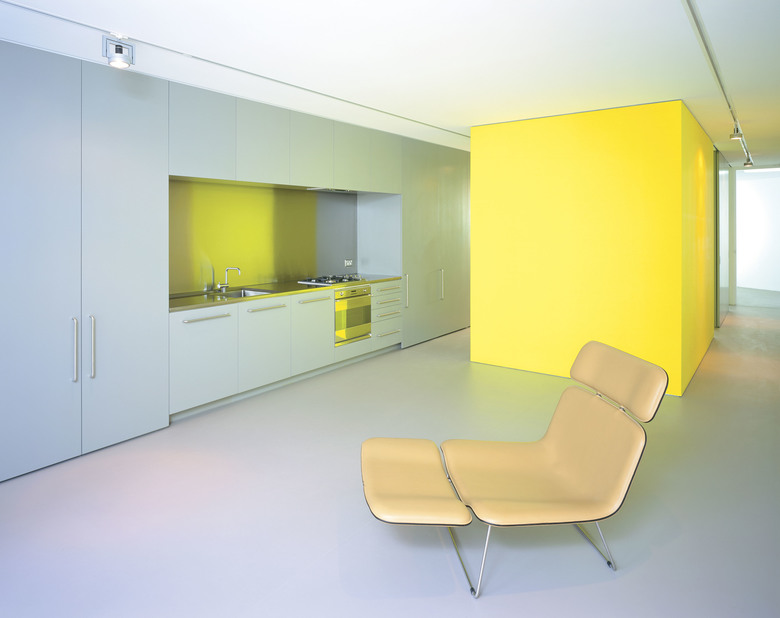 The building was conceived as a transitional element in the streetscape, between a six storey commercial building to the east and single storey terrace houses to the west. The shape of the site dictated that the building be broken down into 4 distinct elements, one a stand alone building on the secondary street frontage, another on the western part of
the site is linked by a common walkway to the major element, that is in turn divided into 2 discrete parts. A lower level
L shaped range of apartments forms a podium, above which a staggered mass cantilevers from a recessed transfer structure. The serrated plan of this upper section is generated by angling the apartments to face north. Completing this heavily articulated building form is a translucent white glass stair tower adjoining the main entry and a 3 level walkway giving access to the units, which is enclosed over much of its length by external aluminium louvres providing protection from the western sun, as well as natural ventilation.

There are 7 different apartment types within the 26 unit development, the majority of which contain a "working wall" running the entire length of the apartment including the balcony. This "working wall" contains kitchens, laundries, wardrobes, studies and exceptional amounts of general storage. This wall is distinguished from the building shell by way of its coloured panels which are expressed externally on the balconies in contrast to the crisp white concrete structure. Bathrooms are typically expressed as fluorescent coloured free-standing pods placed at the centre of each apartment. They allow breezeways through to the bedrooms where the use of large sliding panels achieves flexibility between the need for privacy and the free flow of space. Double height living areas are introduced to upper level apartments expressed externally with double height balconies.

The design adopts passive environmental strategies. All units face north, north-east or north-west and are naturally cross ventilated. The sliding doors to the balconies slide away into a cavity in the "working wall" to seamlessly integrate interior and exterior space. Internal courtyards off bedrooms which are open to the sky, act as thermal chimneys drawing air through the apartments and share natural light with the common walkway through a translucent white
glass wall. The upper most 2 level apartments have a mono-pitched roof light, allowing both natural light and ventilation to the bathrooms, study and stair at the centre of the plan.