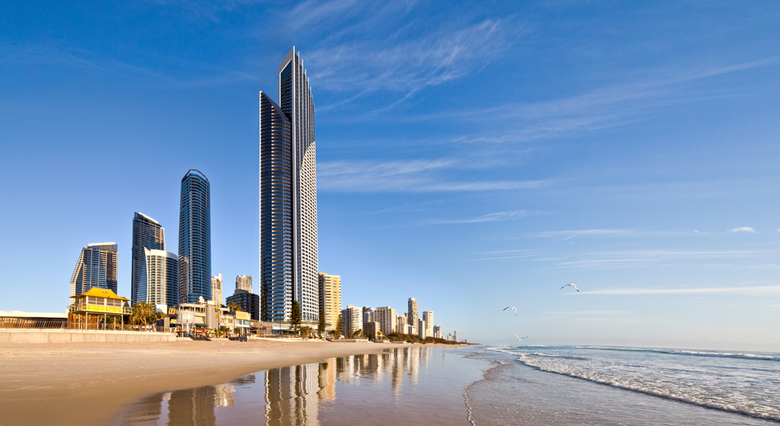 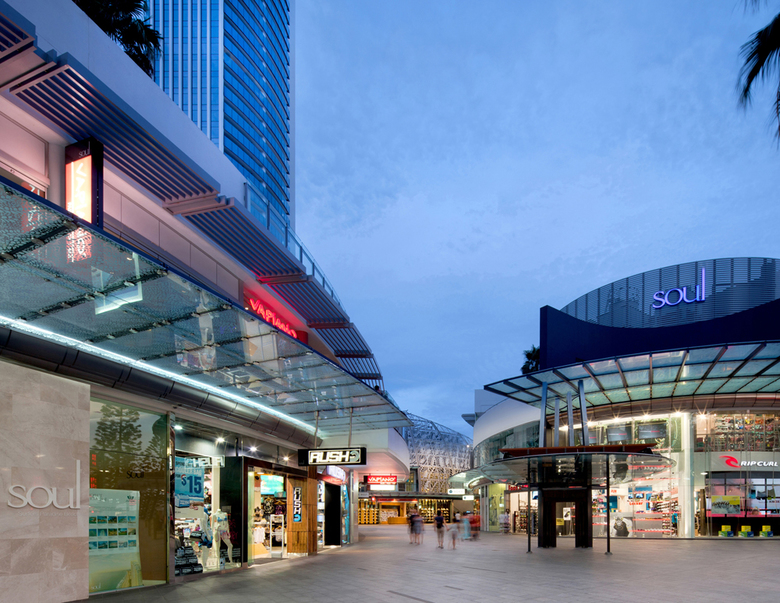 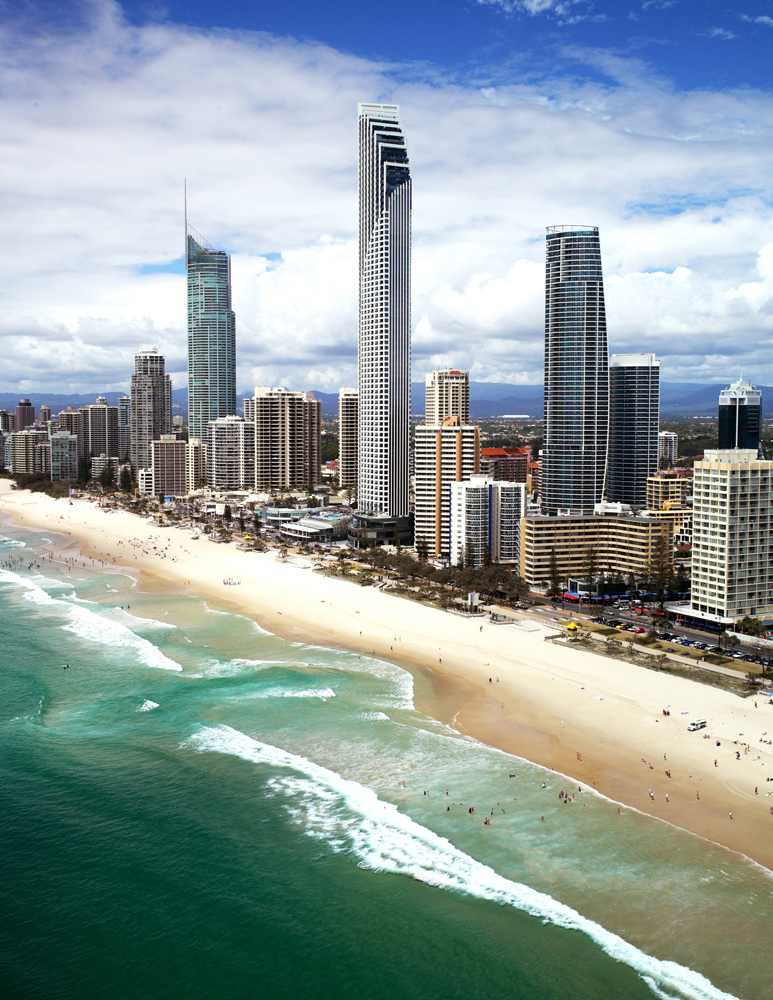 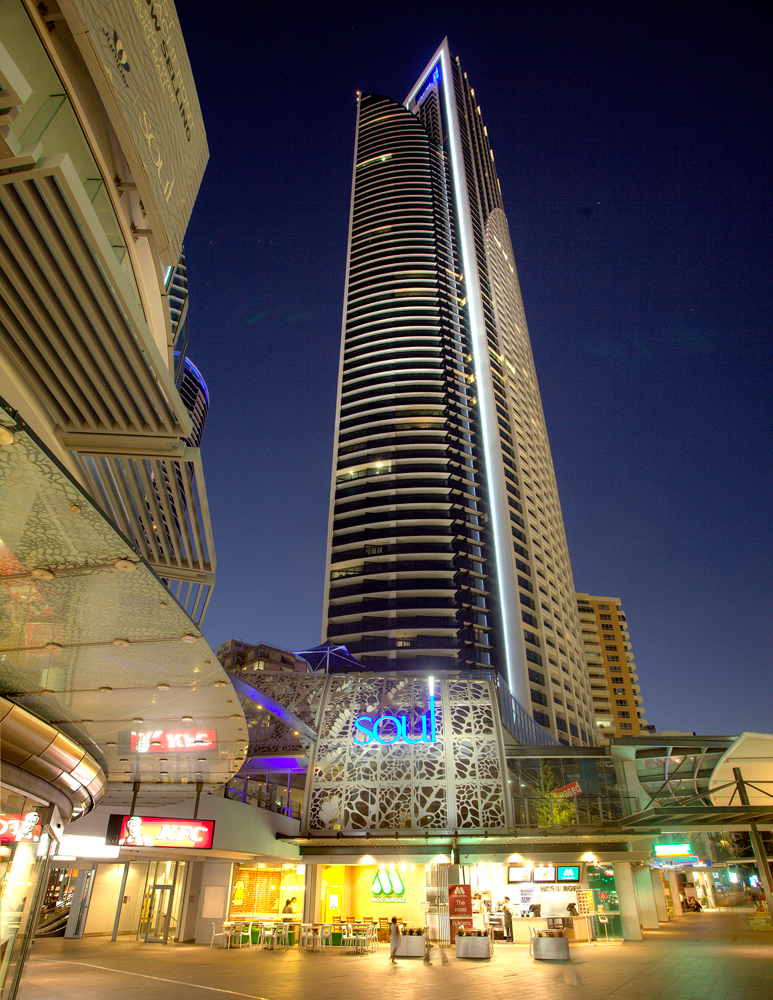 Soul is a 77 level resort residential tower with ground level retail, restaurants and conference facilities located on the beach front end of Cavill Mall. The site was previously occupied by a shopping centre with an internalised retail mall over 2 levels, which failed to engage the city’s most important natural asset - its beach. The objective of Soul was to transform the city’s relationship with its beach front.

Prior to the Soul development, the city’s only physical connection between its urban fabric and its beach front was a staircase 20 metres wide. As a result of the Soul project, 130m of beach front has been transformed into pedestrianised public domain, activated by restaurants and retail.

Soul has been the catalyst for a re-visioning of the Surfers Paradise foreshore. Contributions made by the Developer resulted in council master planning the entire balance of the foreshore generating significantly more open space with integrated event infrastructure.

The 20m wide connection has been replaced by a 130m activated pedestrian domain fronted with restaurants and retail. On-street parking has been relocated to the basement and the traffic has calmed through the provision of a shared vehicle and pedestrian zone.

Soul broke all the rules. Under the Planning Scheme’s beach shadow provisions, the site should have contained 3 towers up to a maximum height of approximately 20 levels. By reconfiguring the available gross floor area into a single, very narrow tall tower, DBI were able to demonstrate empirically that the quantum of shadowing was dramatically reduced protecting public amenity and minimising the impact of shadowing on the beach.

The Soul tower is by industry standards extremely slender. It is single loaded to maximise views and natural cross flow ventilation. Its expression is a direct product of its orientation. Facing south east, it is almost entirely transparent. North east, it is shaded by large concrete columns and concrete balustrades. The north is shaded by concrete blade elements and to the west, openings are minimised and shaded by either concrete balustrades or glass balustrades reducing the direct solar and thus thermal load. Soul’s climatic response is not only highly rational it is also clearly legible and thus didactic.

A tall narrow tower, Soul celebrates its verticality with dramatic vertical striations. Its width is divided into two distinct lobes, separated by a broad glazed fissure, differentiating the two portions. The differentiation is further emphasised by the southern lobes upper truncation, breaking up its visual bulk.

The retail podium is generated by a poetic notion that reflects the forms of an eroded foreshore. It’s conceived as a solid element allegorically eroded by the actions of the ocean. In ‘figure ground’ it can be read as tracking pedestrian desire lines, providing a permeable and pedestrian oriented environment.

In every aspect Soul has demonstrated urban and foreshore innovation for the benefit of the city. It is a transformational project that has 'broken every rule' in order to deliver results well beyond the city's expectation.

Surfers Paradise has experienced difficult economic times in the last ten years and Soul is widely recognised as being a key contributor to its revitalisation. The foreshore now hosts continual events from small scale community events to major festivals, many of which have been created in order to utilise the opportunities that Soul has presented. The DBI team are gratified that Soul’s transformational role has been recognised with Urban Design and Architecture awards by the Australian Institute of Architects.