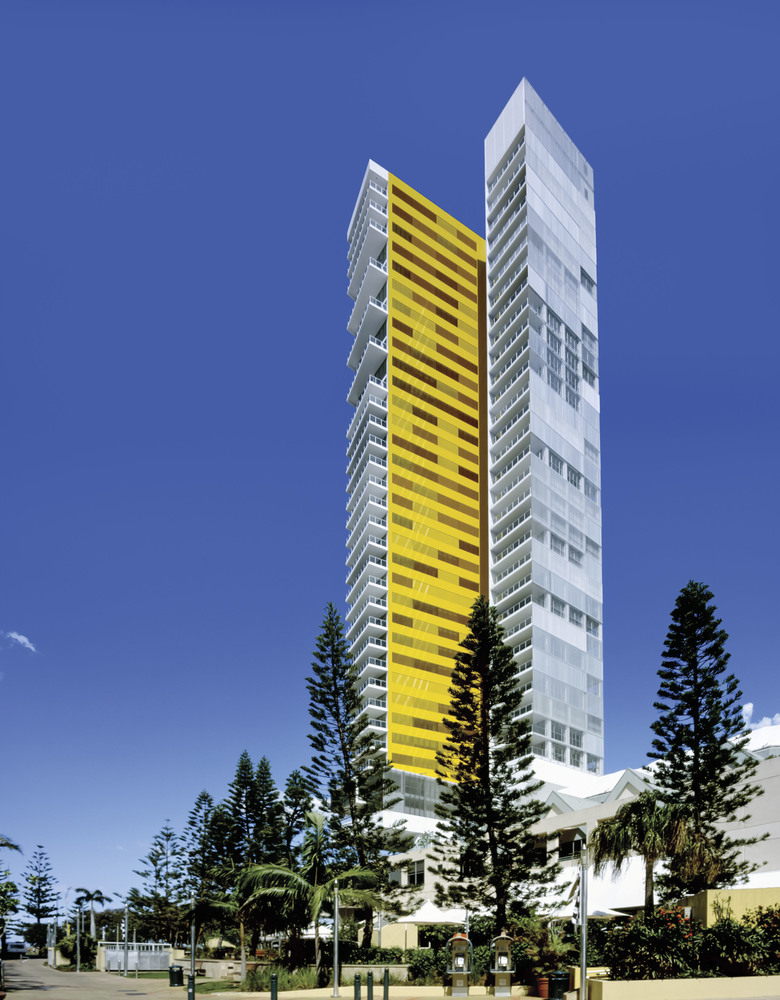 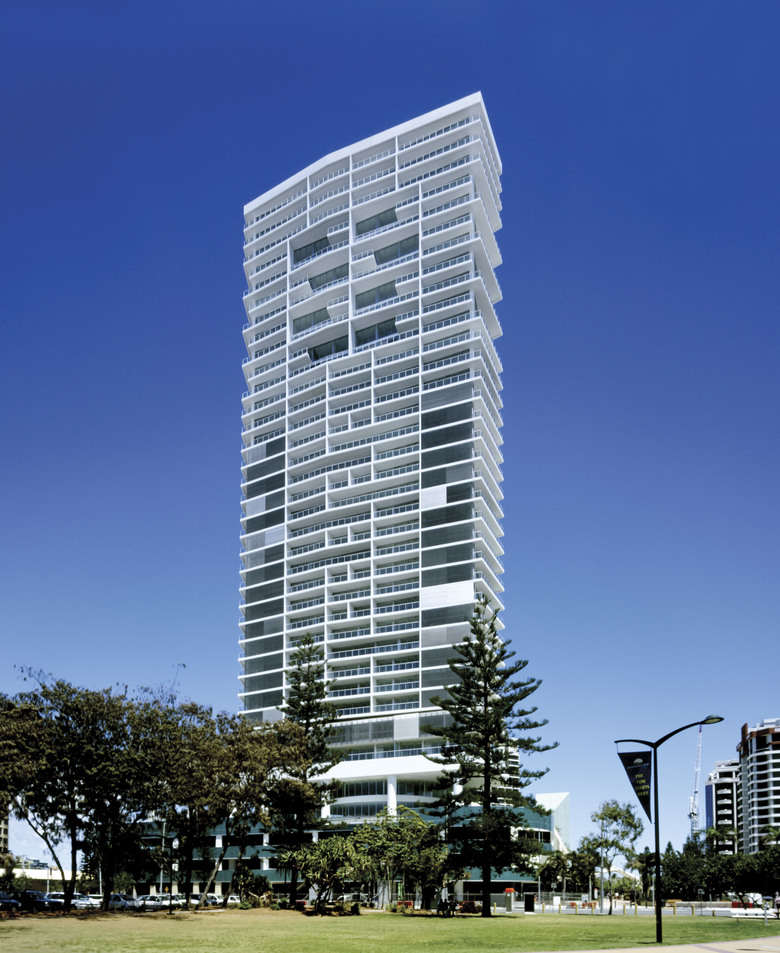 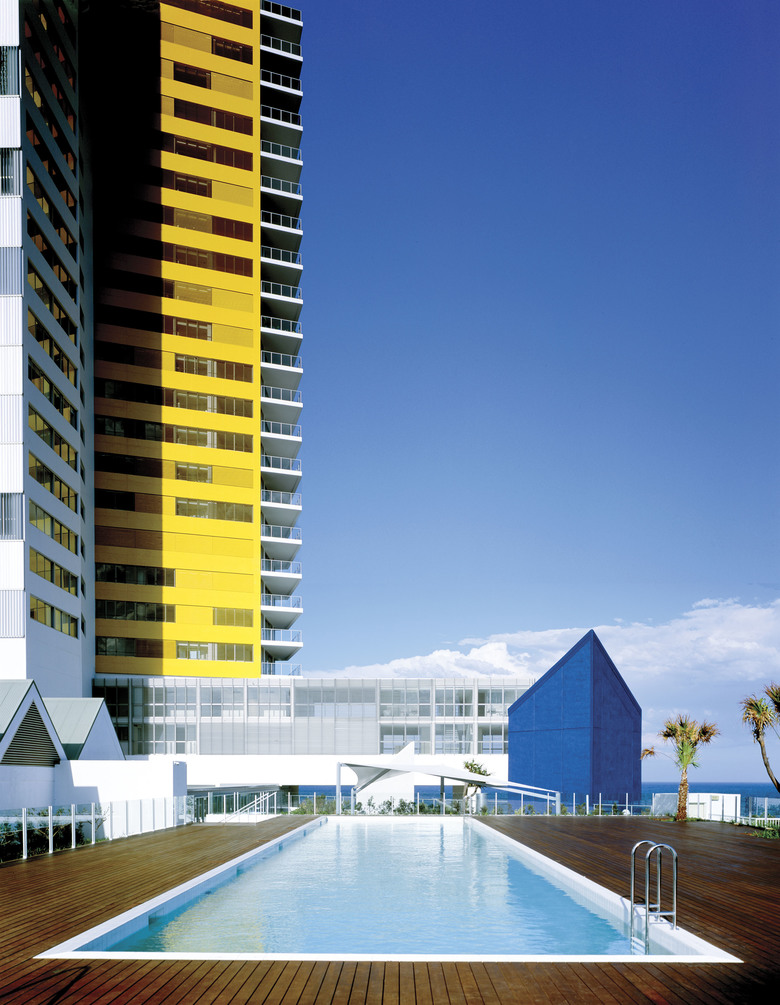 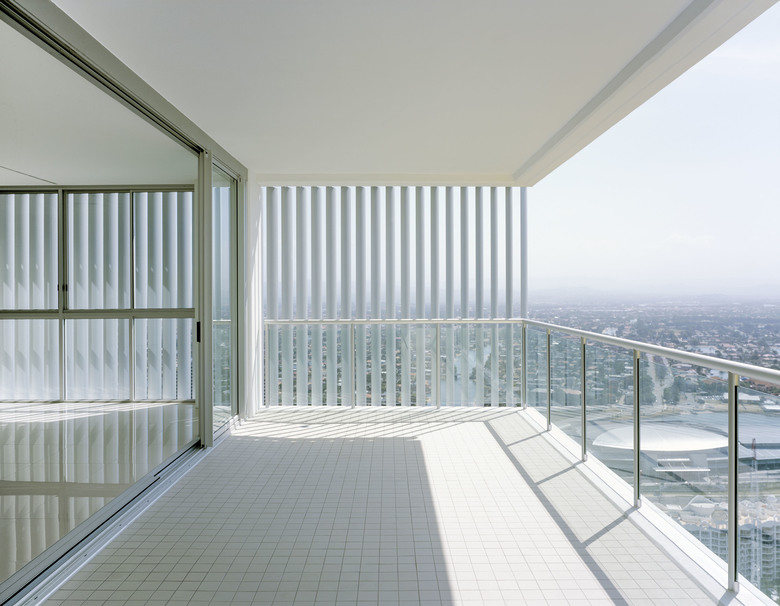 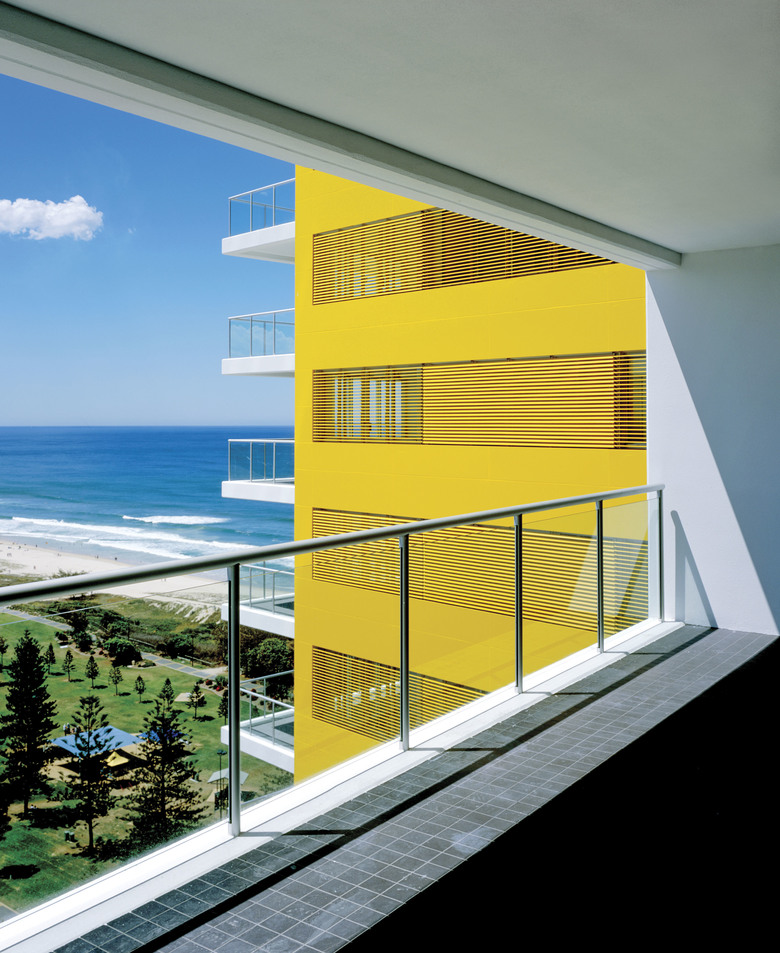 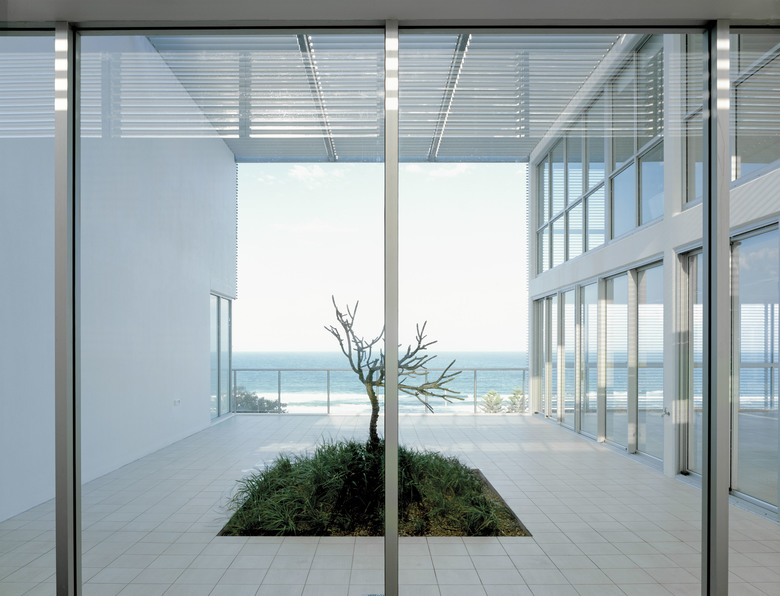 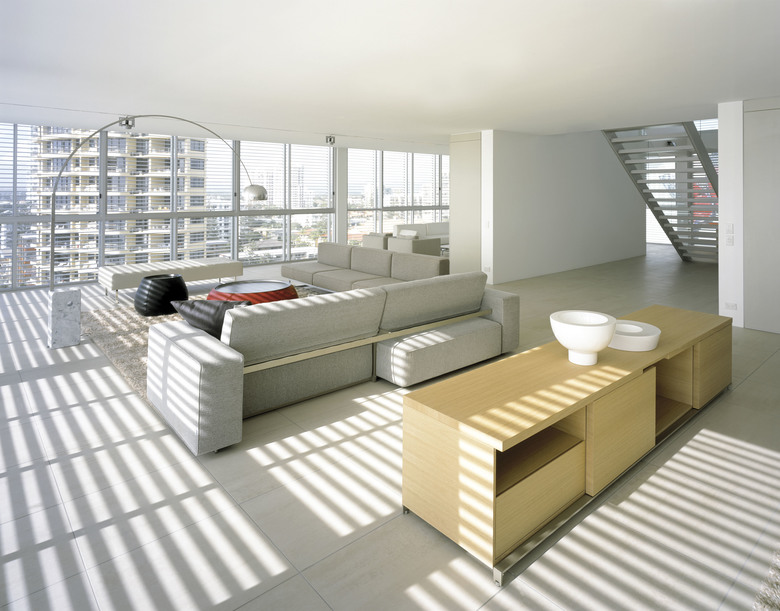 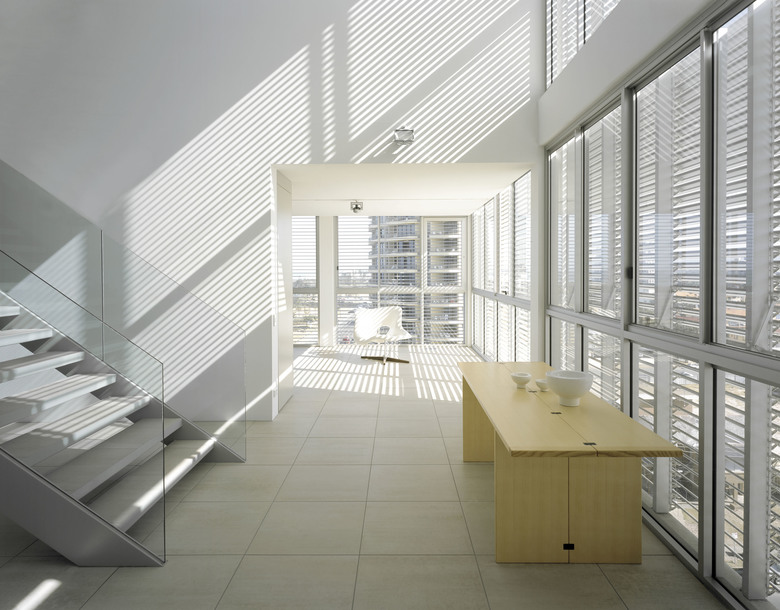 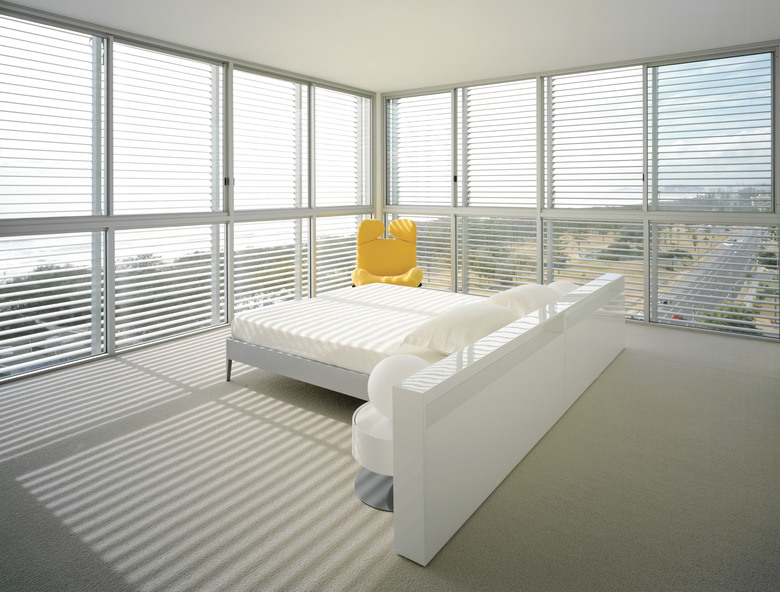 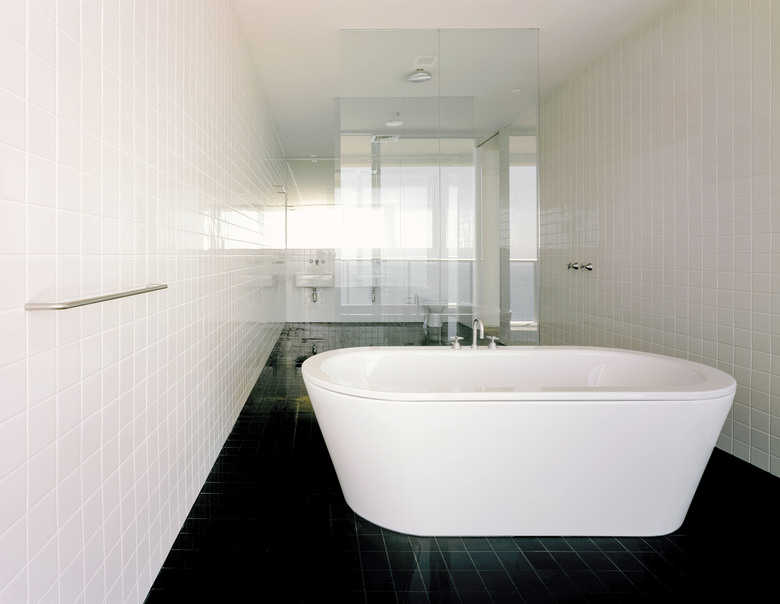 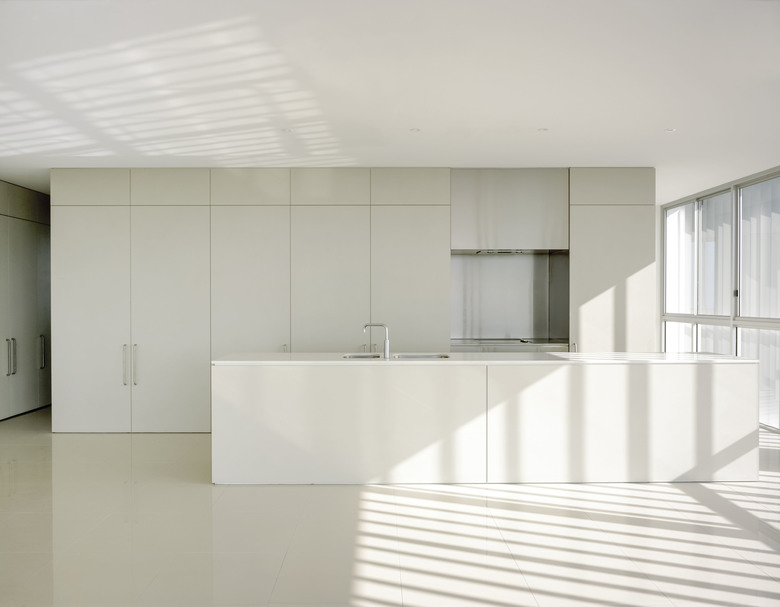 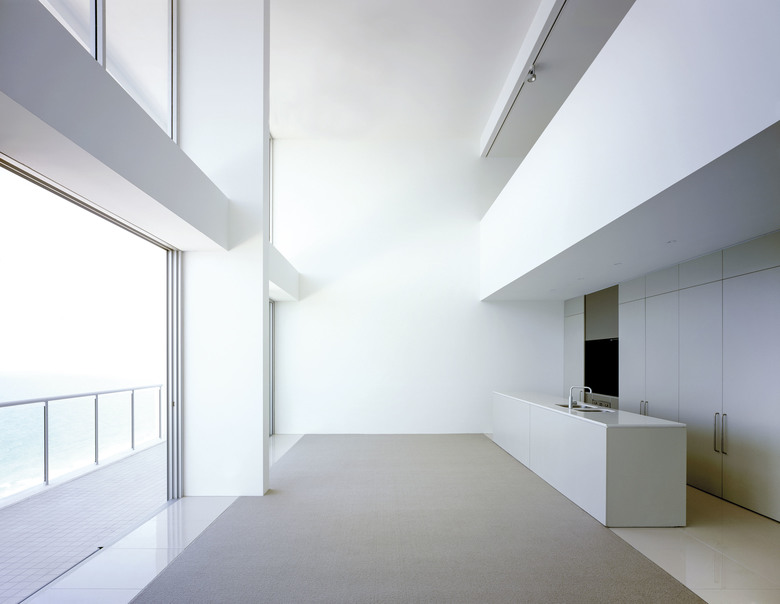 This 37 storey residential tower is located above the eastern end of the existing Oasis shopping centre at Broadbeach on Queensland’s Gold Coast. The building is centred over the existing monorail turning circle and is directly linked to the monorail station at level 3 of the shopping centre. The residential tower contains 134 apartments, a gymnasium/health club and landscaped gardens incorporating swimming pools and a tennis court on the roof of the shopping centre.
Being located at the eastern extremity of the site there are uninterrupted views of the beach and ocean to Coolangatta in the south and Surfers Paradise in the north. There are also significant views to the west of the Gold Coast hinterland and the Great Dividing Range.
The building has three distinct elements, a hovering two storey horizontal bar containing large two level penthouse apartments. This element provides a visual transition from the existing shopping centre podium to the tower above. The main building is composed of a large lozenge shaped tower to the east and a small rectangular satellite tower to the west. The two are linked by the lift core, which passes through the centre of the monorail turning circle providing the structural spine of the building off which the two towers cantilever. The shape of the eastern tower and the smaller western satellite serve to reduce the physical bulk of the building and allow for a number of different wall planes with differing articulation to be seen against each other.
The building is clearly articulated by way of its three part horizontal and vertical elements, strong shadowlines emphasise the physical separation of the parts. All elevations are distinct but linked by a common kit of parts, with materials and finishes reflecting the different aspects of each elevation, open to the east, closed to the west, shaded to the north. The east is the largest and most heavily articulated of the elevations. This is a direct response to the desire to give all apartments access to views over the beach and the ocean, as well as producing a long slender tower only one apartment deep to allow for natural cross-ventilation. This east elevation is articulated by way of the horizontal balcony slabs and vertical blade walls between units. As the unit size and configuration change so does the elevation. Two storey high units are clearly expressed as larger voids with mezzanine balconies. The balconies provide deep modelling to this façade, acting as sunshading to the floor-to-ceiling sliding glass doors. The shadows created by this irregular grillage provide further texture and scale to the building.
Where glazing occurs on the face of the building it is shaded by motorised aluminium sun control louvres, reducing heat load and glare, while introducing further variation, scale and texture. The balconies at the north and south extremities wrap around the ends of the building to form a finely serrated silhouette, exposing the skeletal nature of this façade.
The west elevation of the satellite tower is fully glazed behind a continuous vertical sun screen of ellipsoid aluminium louvres which are motorised and individually controlled by the occupants of each unit. The western façade of the main tower is clad in yellow composite aluminium panels forming spandrels between horizontal strip glazing to the units shaded by horizontal motorised yellow aluminium louvres.
The design of the building has been developed to incorporate passive environmental strategies to create internal spaces with year round comfort for the occupants together with low energy consumption. To the north and east the deeply recessed balconies shade glazing to minimise heat gain, while allowing winter sun to penetrate living areas. Western elevations are shaded by the horizontal and vertical louvres. All units have large areas of floor to ceiling glazing allowing very high levels of natural daylighting. The lift lobbies are also naturally lit with floor to ceiling glazing, with artificial lighting not required until after sunset.
The form of the building is designed to induce natural cross ventilation. The two towers are each only one unit deep, with end units having breezeways either side of centralised service cores, while many of the middle units are two storeys in height with the upper level crossing over the access corridor to allow ventilation through the upper level bedrooms. The large roof provides the ideal location for solar panels to be used for hot water heating and powering of common area lighting.