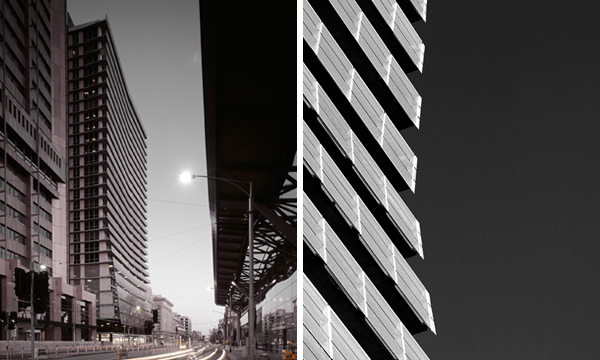 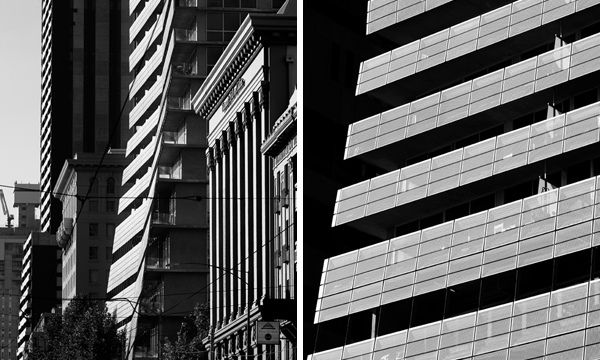 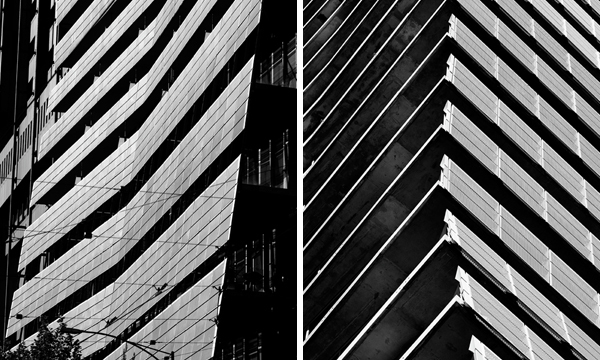 The Western fringe of Melbourne’s CBD was a different place in the 90s. Colloquially known as the ‘Gdansk’ end, in answer to the designer boulevard of the East End’s ‘Paris’ end, this was before Docklands, before Southern Cross Station: it was the CBD’s gritty underbelly. The sheer aluminium wall of Elenberg Fraser’s Liberty Tower became the Western fortress wall of the city, discretely defining the CBD as its own city-state.

This wall is a silver sheet that has been hammered until it folds and bends through its balustrades and supports. Appearing poised to slip off the building’s angled façade, the perforated aluminium shows the angst and distress of the tower and its immediate environment; the building in collapse. A study tour to Japan focusing on Isogawa’s work led to an interest in the Japanese obsession with industrial detailing, seen in the unexpected delicacy of the mesh screens. This permeable quality enables the screens, which extend above and below the slab edges protecting the building from the hard, Western sun, to also be transmissive – the opaque walls become transparent when backlit from the apartments inside.

An off-form concrete building, Liberty is materiality in its purest form - the North face slab is extended to show the raw, unfinished concrete resplendent with plywood markings and nail holes. The ‘Big L’ shape of the tower’s profile can be taken literally, but it also enables the structure - two towers wrapped around a lift core – one silver and white, one charcoal and green.

The dulled silver of Liberty’s exteriors is polished and reflected through the mirrored lobby interiors.

Inverting the Victorian fear of the void, or great unknown – horror vacui – the design focuses solely on what is not there - as you enter you’re suspended in infinite space created by the mirror ring. Like the television show that defined the era it was built in, Liberty’s lobby makes nothing out of something – the only object in the interiors is a fluorescent light installation by Stephen Bram.

As Elenberg Fraser’s first CBD tower, it is fitting that the adolescent themes of becoming through identity, destruction and discovery, are contained within Liberty. It is tough and raw, borne of the harsh Western environment it inhabits - its bullet-ridden screen stands in resolute defiance to the postmodernist movement.