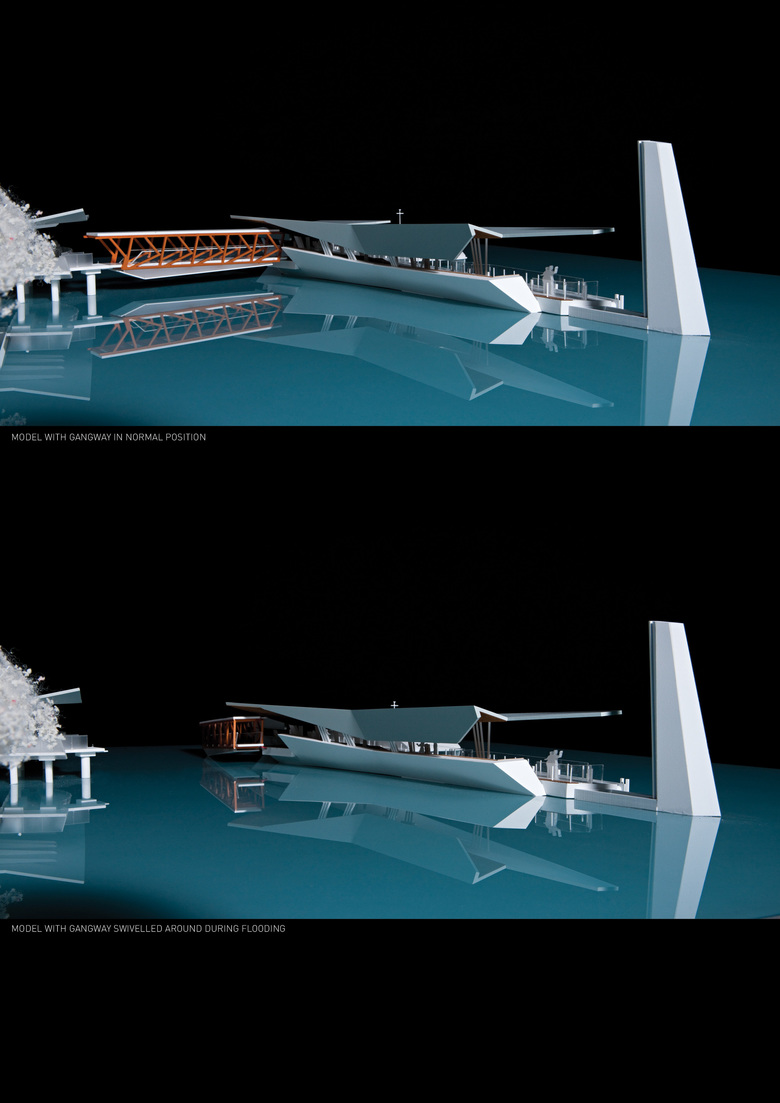 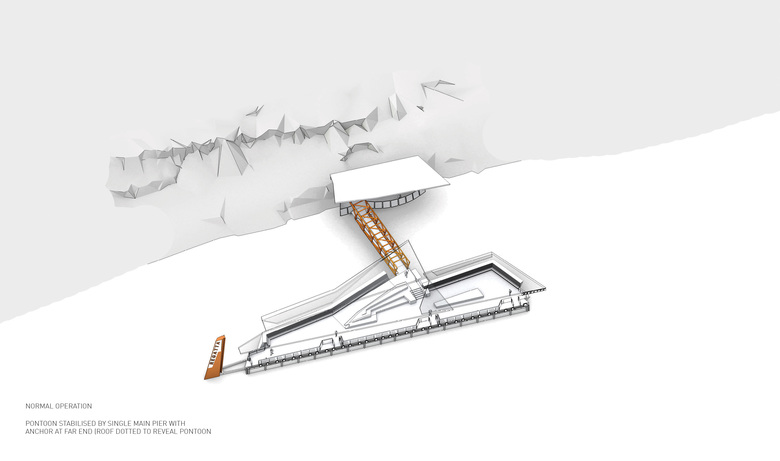 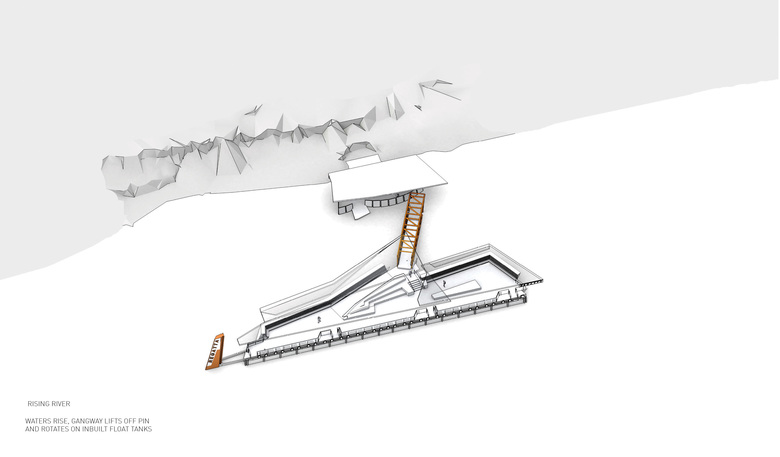 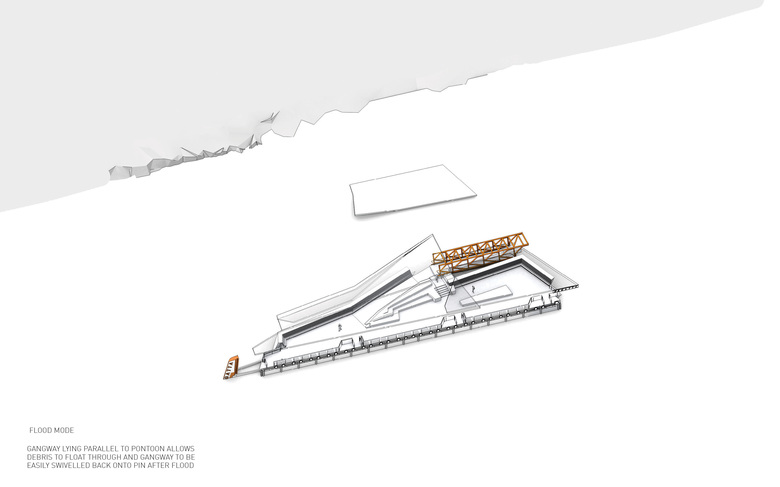 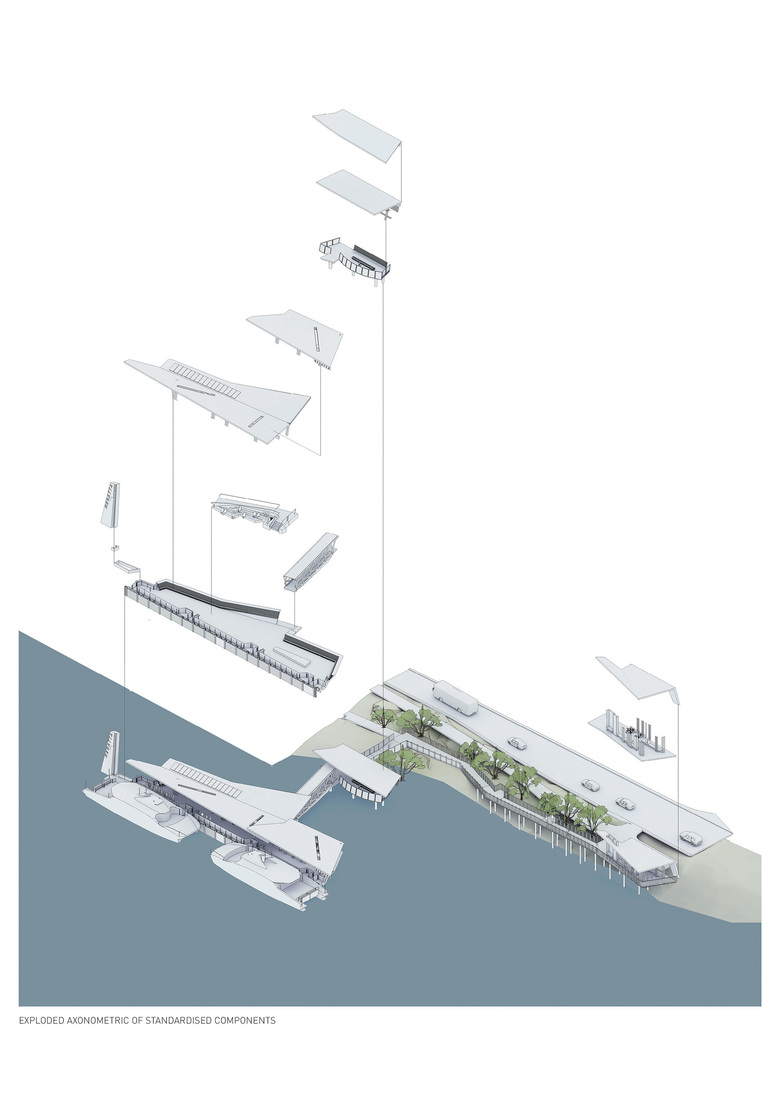 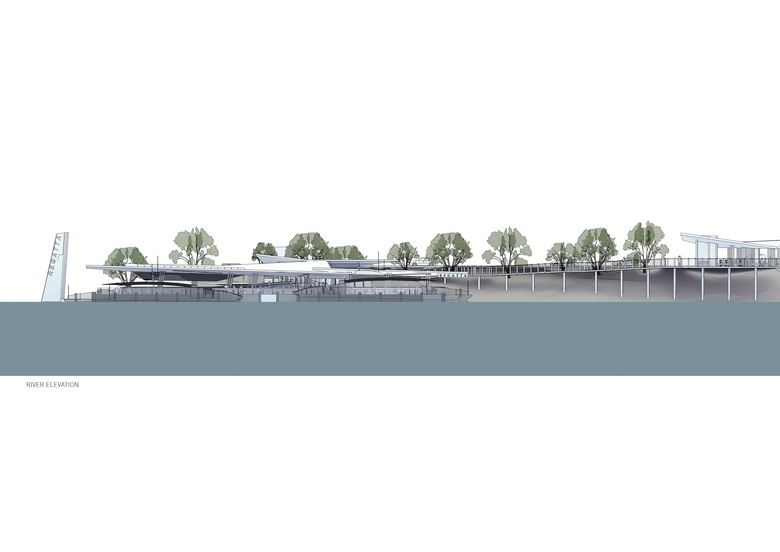 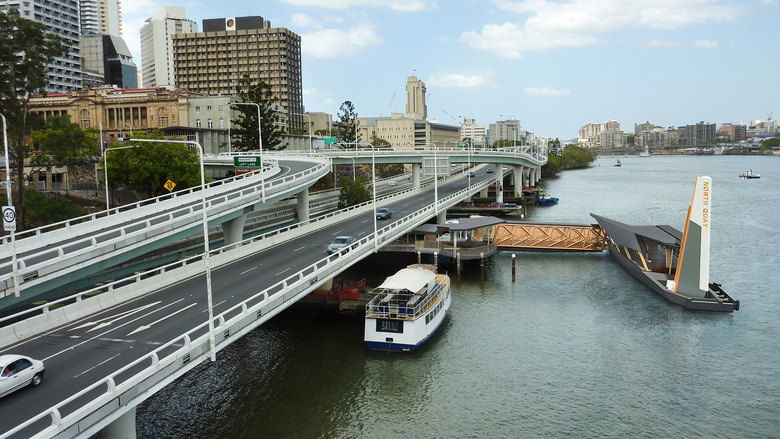 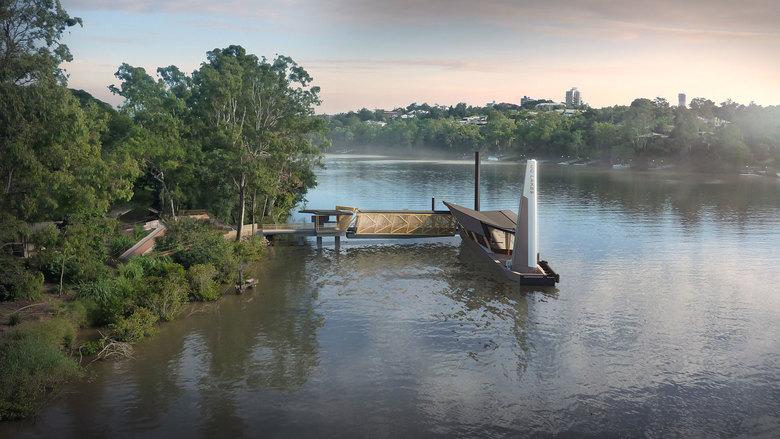 This soon-to-be-built project resulted from a design competition to conceive a new ferry terminal suite in the wake of the devastating 2011 Brisbane floods.

The aim of the project was to see if it were possible to design a flood-resilient ferry terminal to replace the 20 destroyed by the impact of water pressure and of debris crushing against the gangways and piles of the former terminals.

A winning design is a deceptively simple rethinking of the structure and form. It firstly comprises a single tall mass pile to replace the former ribbon of piles that stabilise the pontoon platform, it being placed at the upstream end to withstand all possible impacts. This pile acts also as each terminal’s marker along the serpentine Brisbane river.

The second move was to devise a gangway with float tanks underneath so that in flood event, it lifts off a pin and rotates around to allow the debris to float through. When a future flood recedes, it is simply rotated back into position.

The new system entails an array of ingenious sliding clamps and pins devised by our engineer, it being adaptable to many such applications worldwide.

But more importantly, the design enables a completely new experience of the river than before where the terminal will act not only as functional travelators but as rediscovered urban spaces on the urban waterfront of the city.

The self-imposed aim of our project was to simultaneously solve the problem of future flood resilience and create floating spaces where all people can in benevolent climatic times enjoy the interface between the city and its defining river.

The technical system has two main components. One is a three-pronged 15 metre high single pile designed to withstand any possible impacts such as an escaped ship (as occurred in the 2011 floods). It replaces the multiple piles which traditionally surround ferry terminal pontoons as, during flooding, all pressure is from the upstream end. The pontoon too is reconfigured, tapering toward the pile so that fast-flowing water glides past it.

The pile is connected to the pontoon by the spar and C-clamp which accommodates normal ebb and flow as well as flood rise, sufficiently tall to avoid the pontoon lifting over it (another problem incurred in the 2011 floods).

For the gangway where debris collected and forced over the previous ferry terminals, we devised a system of floating tanks, together with a pin-joint at one end and a swivel joint at the pontoon end, so that in flood it naturally lifts and rotates around to parallel the pontoon.

A constraint of the site was a limit on the extent of the terminal into the river due to navigational width requirements. This led our design to elevate the gangway and incorporate an angled ramp on the pontoon itself, fortuitously creating a space where a café will be integrated and enhancing what will become the city’s most believed series of urban retreats.

We always in the process set out to enhance the public experience of the river, given that the floods only occur in the tropical January season.

The technical solution was thus developed such that it facilitated also a completely transformed experience of the city and its riverfronts. By replacing the previous visually obstructive, multi-pile surrounds with a single resilient pile, the pontoon was liberated to become an unencumbered space, protected by canopy from the elements, where people can come to socialise, to fish and to take in the breadth of the river.

The need to elevate the gangway for technical reasons was harnessed to create a three-dimensional pontoon into which a café, refreshment amenities and inbuilt waiting seats are integrated.

The sculptured form of the pontoons and their canopies are related to a holistic architecture which acts as metaphors of the wings and bodies of the marine birdlife that characterises the river, or of maritime vessels through plough their trade along it.

But most of all, a design that our client (the Brisbane City Council) sought only to resolve the crippling loss of one of its fundamental urban transport systems during flood devastation, has evolved into one where the people of the city and its visitors from interstate and overseas can intimately engage with our greatest environmental asset.